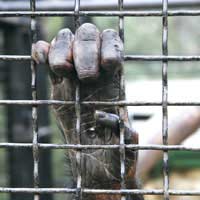 While there is a wide range of animals used for testing purposes, non-human primates deserve particular attention due to their likeness to humans and the controversy their use has generated throughout animal testing history. Non-human primates actually only make up less than half a percent of research animals used, with approximately sixty thousand used in testing each year in the United States and roughly ten thousand used per year in the European Union. Non-human primates include several types of monkeys, such as:

For the most part, monkeys used for testing purposes are bred for that specific aim. While there are breeding facilities locally, some of the animals are imported, depending on the required monkey. In addition, some non-human primates used are caught in the wild.

One of the notable challenges in using non-human primates is that they can be quite difficult to handle. Therefore, restraints are commonly required, but the downside to restraints is that they may cause the animal to experience stress and fear, which can then sway the results. Inaccurate data can mean increased costs to run the experiments again or compromised approval of the drug. It also means that animals were essentially used in an experiment that was void, rendering their lives useless in terms of any suffering or death being in vain. Currently, alternatives to physical restraints include the addition of psychological support, using chemical restraints to subdue the animal or actually training the animals to accept the restraint.

Abuses of non-human primates tend to create a high level of media attention. This, in part, relates to the focus of many animal welfare campaigns that target researchers who perform work on these animals. One highly publicised case of abuse involved research conducted at the University of Wisconsin. A 'pit of despair' was created that was meant to induce clinical depression. Baby monkeys were placed in a tiny chamber that contained food and water holders as well as a waste chamber to remove waste. Monkeys were placed in these chambers, where they remained isolated for six weeks. After the isolation, monkeys were hostile, withdrawn and unsociable; most did not recover.

Non-human primates are very similar to humans in comparison with other animal models. It is for this reason that a great deal of the controversy surrounding animal testing is centred on non-human primates. In fact, some of the most threatening attacks on researchers have occurred as a response to a researcher's use of non-human primates. Attacks have occurred on researchers working at several universities in the United States. In one case that occurred at Columbia University several years ago, a researcher who was using baboons received numerous threats, which ultimately led him to halt his research because he feared for his safety. He did, however, still cite that he believed his work to be humane and ethical.

Future of Non-human Primate Use