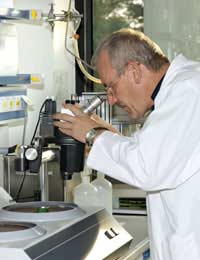 Rodents are used in vast numbers around the world, most notably in the United States (US) and in the United Kingdom (UK). In the US, it is estimated that twenty million rats and mice are used each year. In 2005, nearly two million mice were used in the UK, while half a million rats and roughly forty one thousand other rodents were used. Mice are actually used most often in terms of vertebrates. This is due, in part, to the fact that they are cheap to obtain, easy to handle, small and can reproduce rapidly. They are also thought to be a comparable model for human diseases and they share most of their genes with humans. Scientists can quite easily manipulate various genes by the addition, deletion or insertion of one to mimic human diseases. This allows them to learn more about the mechanisms of disease as well as develop drugs and other treatments.

Rabbits - particularly albino rabbits - are commonly used in testing for cosmetics and other chemicals, where they are used to perform the Draize test. This test assesses drug toxicity and involves a substance being placed on the rabbit's eyes or skin, which are then observed for redness, irritation or any other damage. Upon completion of the test, rabbits are killed. The test itself is a controversial one and is known to cause blindness and other types of damage in rabbits who undergo the procedure. It is also criticised harshly by animal welfare groups on the grounds that it causes excessive pain and suffering, without providing any real contribution to science given its frequent use for cosmetics testing. Another argument is that a rabbit's eyes are quite different from a human's eyes, which essentially renders the test inaccurate and unscientific. Currently, however, anaesthetics are sometimes used and smaller doses of the substances in question are applied. In addition, modifications of the Draize test that are less harmful are now used. Also important is that if an in vitro test shows a substance to be harmful, it is not typically used in a Draize test because the result is anticipated as quite painful to the rabbit. Overall, there are about twenty thousand rabbits used each year for animal testing in the UK.

In the UK, approximately two hundred thousand fish are used per year. Of these, zebrafish are commonly used. Zebrafish can breed in enormous numbers, which means they are a convenient and effective animal to use for testing. In fact, zebrafish have become quite popular for their use in the study of biology and development. They are also quite small and transparent and can also be manipulated well by researchers who are studying disease processes. This means that zebrafish have a notable use as an animal-model for human disease. There is also potential for their use in drug discovery, particularly as they have become much more popular among research use in recent years.

Importance of Fish, Rabbits and Rodents

Rodents will likely remain one of the most important animals used for research today. Their ability to provide information regarding drug toxicity, human biology and disease understanding and treatment will likely keep their use popular and the numbers used each year around the world high. As alternatives arise to tests such as the Draize test, it is expected that rabbit use will stabilise or possibly decrease while the use of fish is set to increase as researchers find more uses for zebrafish and others in models of human disease.