Home > The Basics > What is Animal Testing?

What is Animal Testing? 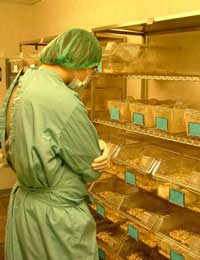 Animal testing is a phrase that most people have heard but are perhaps still unsure of exactly what is involved. Whether it is called animal testing, animal experimentation or animal research, it refers to the experimentation carried out on animals. It is used to assess the safety and effectiveness of everything from medication to cosmetics, as well as understanding how the human body works. While supporters believe it is a necessary practice, those opposed to animal testing believe that it involves the torture and Suffering Of Animals.

Animal testing is used for countless products and applications. Everything from toiletries to medications have likely been tested on animals at some point prior to their distribution. Some of the products that commonly involve animal testing are:

Virtually every available Medical Treatment today has, to some degree, involved animal testing. The animals themselves may be bred specifically for testing or they may be captured in the wild. There are also commercial establishments that sell animals specifically for use in animal testing facilities. Animals are considered to be similar to humans in terms of assessing safety, which means that there are Strict Requirements for testing on animals with regards to new drugs.

In the UK, for example, a new drug must have been tested on two different species of live mammal. However, those who are opposed to animal testing and view it as an unnecessary infliction of suffering cite that the stress an animal experiences will impact the accuracy of the results, rendering them useless. For now, however, animal testing is required before drugs and some other products are available for consumer use.

Read about the history of animal testing in our article Background and History of Animal Testing.