Home > Challenges > Threats to Researchers who Use Animals for Testing 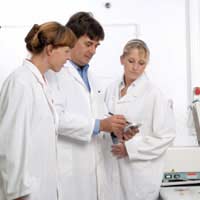 The controversy surrounding animal testing is enormous and not surprising, given that it deals with animal life as well as animal pain and suffering. Protests occur quite frequently around the world, particularly in westernised countries. Animal welfare groups usually stand behind these protests, providing anything from educational leaflets and information to encouragement and support for those who convene and protest against the practice.

Unfortunately, some animal welfare groups - in their overzealous quest to end animal testing - become extremely aggressive in their tactics and actually threaten the researchers who perform animal testing. The threats may involve damage to property, company assets or even threats to clients and affiliates of the organisation performing the animal testing. Finally, threats may occur that hint or clearly show intent to physically harm the researcher. Overall, the threats all have the same aim, which is to let the researchers and organisation know that the group will not tolerate animal testing. It is, however, the use of severe intimidation, illegal activities and bodily harm that have resulted in jail time for numerous animal rights activists.

In an incident only a couple of years ago in 2006, a researcher at the University of California ended up halting his experiments on primates when he received numerous threats from animal rights activists. His personal details such as his phone number and address were reported on the website of the animal welfare group. He also had protests held in the front of his house. In another incident, a bomb that was meant for the researcher was mistakenly placed in front of an elderly woman's house. Ultimately, the Animal Liberation Front (ALF) took responsibility for the attack. The researcher eventually halted the experiments and requested that the group stop disturbing his family.

One other threat that also occurred at the University of California was last year, when an animal welfare group put a bomb underneath a researcher's car. This particular researcher conducted experiments on cats and primates and the group wanted to send a message that they would not tolerate the animal testing. The bomb, however, had a malfunctioning fuse and thus, did not explode.

Threats to researchers can also result in property damage, usually when the researcher does not initially give in to the demands of the animal rights activists. It is estimated that £150 million in damages to properties has occurred in the previous twenty-five years - all as a result of animal rights activism. In fact, millions more are used to provide surveillance and monitoring each year. Groups such as ALF quite openly promote illegal activism although they claim they do not support violent means of activism. However, their previous history of threats and protests indicate that its members will use violence where they deem it necessary. ALF also claimed that it caused the almost one million dollars of damages to laboratory equipment and buildings in 1999 at a university in the United States. Researchers there were investigating Alzheimer's disease and also developing a vaccine for cancer protection.

Threats to researchers are a reality given the intense passion and debate regarding animal testing. There will likely always be a minority of animal rights activists who believe that they are justified in harming human life for what they believe is the greater good of saving many animals. Most animal welfare supporters protest peacefully although with strong and adamant opinions and beliefs for their quest to end animal testing. Legally, there is no tolerance for threats to a person's life and the intention to harm a researcher. The difficulty, however, can be to actually prove which animal welfare group is responsible. Yet, in some cases, a group will take claim to damages and essentially taunt the legal system because it ultimately means more exposure for the group and more exposure regarding the campaign to end animal testing. For now, most of the public supports regulated animal testing for biomedical purposes and it is hoped that the majority of protests will be peaceful ones that avoid threats and intimidation.
Next Page

Allegations of Abuse in Animal Testing
Share Your Story, Join the Discussion or Seek Advice..
[Add a Comment]
More info on pros and cons. I am doing a research project and need more info. Thanks. Love u
chloe - 21-Feb-18 @ 7:24 PM
Bry is you had to be a test subject then, would you????
Plop - 28-Sep-16 @ 11:53 AM
Calm down we are not animals. I know that it is wrong but you just need to chill. We are humans...not apes.
Frost - 21-Oct-15 @ 9:13 PM
animals are not like humans, so you would never get perfectly accurate results. but when i ask, "why don't we test on humans? it would be more accurate," they tell me, "oh no, we could never subject humans to that abuse!" what, so you're fine with making "animals" suffer for our benefit, but you won't let humans undergo experiments because it would be "abuse". NEWS FLASH!!!!!! WE ARE ANIMALS TOO! WE ARE THE SAME! IF IT'S ABUSE FOR US, IT'S ABUSE FOR RATS, BIRDS, MICE, MONKEYS, CATS, DOGS, RABBITS AND ALL THE OTHER POOR SOULS THEY THINK IT'S OKAY TO FORCE FEED-AND ALL THE OTHER HORRIBLE THINGS THEY DO- BUT THEY WON'T DO IT TO US!
bry - 6-Oct-15 @ 11:29 PM
animals can`t say ,"No". Don`t take them for granted.
jz - 18-Feb-15 @ 5:23 PM
Title:
(never shown)
Firstname:
(never shown)
Surname:
(never shown)
Email:
(never shown)
Nickname:
(shown)
Comment:
Validate: